One of the leading sculptors in Renaissance Florence was Donatello, who had studied with Ghiberti (the winner of the Baptistry door competition).  Donatello was one of the first sculptors to break with the elongated “spiritualized” statues of the Middle Ages, in favor of a new classically-inspired style that expressed a more worldly Humanist interpretation of biblical characters.  Dontello’s Saints literally “take a stand,” behaving more like Roman statesmen and Greek Classical heroes, providing Florentine citizens with a new kind of role model to emulate — one based on the ideal heroes of ancient Greece and Rome, rather than the “saintly” models of the past.

One of Donatello’s most famous statue was a figure of Saint Mark, carved for the Church of Or San Michele in Florence.  Or San Michele was a multi-purpose building:   it served as the headquarters for the Florentine Merchant Guilds, and and also doubled as a granary and stock exchange — so it was a religious building, but also served a secular function.  The Gothic-style niches on the exterior of the building had been assigned to each of the city’s leading merchant guilds in the previous century, with the instructions to commission a sculpture to fill them with statues representing their Patron Saints.  They remained empty for quite some time, but when Florence came under attack from the Duke of Milan, the guilds sprang into action, and the niches were filled with life-size statues in rapid succession.  Once again (as we saw with the Baptistry doors competition), public sculpture was being called upon to rally public confidence, and to forge a sense of civic pride amongst the city’s citizens.

Donatello’s Saint Mark was commissioned by the linen draper’s guild.  Not surprisingly, then, he hardly resembles the “saintly” characters that the church sponsored to decorate cathedrals. Carved in marble, the figure stands 7’ 9” high.  Donatello had studied ancient Greek and Roman statues, and it is clear that he applied what he learned in this work.  Saint Mark is standing in the classical contraposto pose, with his weight shifted to one leg.  The drapery falls naturally around his body, and gives a convincing sense of the body beneath (we should remember that this statue was made for the linen draper’s guild — these were men who knew a lot about fabrics!).  His long beard and wise face resembles an ancient philosopher, while his large hands and feet give him a commanding presence.  Compared to the slender, weightless figures that decorated Gothic cathedrals, Donatello’s statue has become fully human — a true citizen of the Republic, rather than a heavenly apparition.

The Contemplative Life vs the Active Life
Donatello’s Saint Mark is physically different from Gothic statues, but he is also different in character and personality.  Gothic statues appear “saintly” in character, reflecting the Medieval ideal of the “contemplative life” which advocated prayer as a path to salvation. Serene and calm, they seem to be lost in spiritual contemplation.  Donatello’s Saint Mark, on the other hand, stands firmly on the ground, and seems fully engaged with the world around him.  Far from being “saintly,” he exemplifies the new ideal of the “active life” that was embraced by Florentine Humanists, who believed that good deeds were equally valid as a path to salvation.  A true “man of action,” Donatello’s Saint Mark embodies the human virtues of intelligence, strength, and courage, rather than the saintly virtues of pious devotion to god.  Dignified and self-reliant, he was a fitting symbol of the Humanist ideals of the Florentine city-state.

Donatello’s bronze statue of David is probably his most important works, and one of the iconic accomplishments of the Renaissance.  It was commissioned by Cosimo de Medici, a wealthy banker who wielded tremendous political power in Florence.  And here we see how important private patronage was to the advancement of the Renaissance:  this statue would never had been made if the church remained the only sponsor of art!

The statue reflects Donatello’s close study of classical sculpture.  In addition to the classical contraposto pose (where the weight is shifted to one leg), Donatello chose to portray the biblical hero in the nude — which was common in classical sculptures, but unprecedented in Christian Europe (in fact, Donatello’s statue was the first nude statue to be produced in Europe since the fall of Rome!).

In the Middle Ages the body was considered a vessel of sin and a source of shame (which is why Adam and Eve covered themselves up when they were banished from Eden).  Nude figures were therefore rarely represented in church decorations, unless it was to show the shame of sin.  But Donatello’s statue was not made for a church – it was made for a private patron, to decorate the courtyard of his family palace!

Part of the inspiration for reviving the Classical tradition of the nude was the Humanist values it embodied:

“The nude first became significant in the art of ancient Greece, where athletic competitions at religious festivals celebrated the human body, particularly the male, in an unparalleled way. The athletes in these contests competed in the nude, and the Greeks considered them embodiments of all that was best in humanity. It was thus perfectly natural for the Greeks to associate the male nude form with triumph, glory, and even moral excellence, values which seem immanent in the magnificent nudes of Greek sculpture.”
The Nude in Western Art and its Beginnings in Antiquity 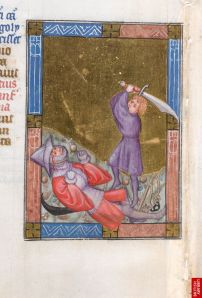 Why David?
The story of David and Goliath comes from the Old Testament.  David was the young shepherd boy who killed the giant Goliath with his slingshot, and then cut off his head.  In the Middle Ages the story was about the power of faith, but in the Renaissance David became a political symbol of the Florentine city-state.  An earlier (clothed) statue of David by Donatello stood in the Palazzo Vecchio  (the Florentine Town Hall), with an inscription that read:   “God gives aid to those who fight for the country even against the most terrible foes.”  Cosimo de Medici, who was de facto ruler of Florence at the time this statue was made, had a similarly patriotic inscription inscribed on his bronze version of the statue:  “The victor is he who defends the country; God crushed the wrath of a huge enemy; Behold a boy has defeated a great tyrant.  Conquer O Citizens.”  Once again, a biblical figure has been converted into a political symbol, and an expression of human self-confidence and pride.

Anatomy in the Renaissance
The anatomical accuracy of Donatello’s statue is also worthy of consideration.  The renewed interest in the nude human figure in the Renaissance prompted many artists to pursue an increasingly scientific understanding of anatomy.  As Leonardo da Vinci wrote:

“It is a necessary thing for the painter, in order to be good at arranging the parts of the body in attitudes and gestures which can be represented in the nude, to know the anatomy of the sinews, bones and muscles and tendons.”
Universal Leonardo

Although forbidden by the church, some artists even resorted to dissecting corpses in order to study the muscles, tendons, ligaments, and bones that enable the human body to move. Alberti advised artists to study the human body, and to create figures in stages, beginning with the bones, and then adding the layers of muscle, flesh, and skin.   Many surviving drawings and engravings show that artists commonly used this method.

This print by Antonio Pollaiuollo illustrates the growing interest in anatomy.  As Christina Zapella explains:

“As many art historians have noted, the Renaissance started much earlier in the fields of sculpture and architecture than it did in painting and drawing.  So although Donatello had created his nude David decades earlier, the nude had yet to be mastered in a two-dimensional form.  Not everyone was taken with Pollaiuolo’s print, and it is believed that Leonardo da Vinci criticized it, saying that the bodies looked like “bags of nuts.” Pollaiuolo’s nudes may be overly muscular, but they were probably the most naturalistic human bodies created in Italy up to that point.”
Christine Zapella, “Antonio Pollaiuolo, Battle of Ten Nudes,” Khan Academy

To achieve this level of accuracy, Pollaiuolo probably dissected corpses, anticipating the methods of Leonardo and Michelangelo.  In his Lives of the Artists, Giorgio Vasari wrote that Pollaiuolo was the “first master to skin many human bodies in order to investigate the muscles and understand the nude in a more modern way.”

Realism and Idealism
The scientific understanding of the human body was tempered by the Renaissance emphasis on idealism, which was also inspired by Classical art.  Greek artists were influenced by Plato’s idea that reality is only an imperfect reflection of divine reality, which is more perfect than nature.  So Greek sculptors took the reality they could observe (the living human form), and “perfected” it by applying mathematically derived proportions.

Renaissance artists did the same.  Although they studied human anatomy, they also measured Greek sculptures in order to unlock the secret to their perfection.  Thus, Italian artists did not just faithfully record the appearance of nature (the way Flemish painters such as Van Eyck did).  Instead, they idealized their figures, in order to express the divine beauty inherent in the human form.

The Nude in the Middle Ages and the Renaissance
http://www.metmuseum.org/toah/hd/numr/hd_numr.htm

The Study of Anatomy in the Renaissance
http://www.metmuseum.org/toah/hd/anat/hd_anat.htm

This work is licensed under a Creative Commons Attribution-NonCommercial 3.0 Unported License.